331 mph without a speeding ticket.

Oct 27, 2020 | Advanced Manufacturing, Made In Washington 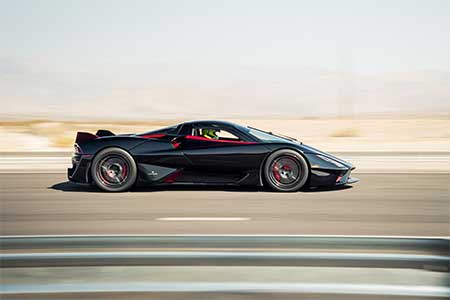 Which state built the fastest production vehicle in the world? Hint: It wasn’t Michigan. The honor goes to a Richland, Washington company, SSC North America. Their Tuatara smashed the existing speed records for:

The records were set by race car driver Oliver Webb on a closed portion of Highway 160 in Pahrump, Nevada. The car could have gone even faster if it weren’t for some squirrely side winds that made one of the runs a bit dangerous so Webb had to back off a bit to keep control. The new record is 40 mph faster than the old record which was held by Swedish car company, Koenigsegg Automotive.

The Tuatara is the brainchild of Jerod Shelby and his company of 24. Shelby grew up in the racing world and always dreamed of building his own cars. The company had just moved into its new production facility in Richland when the pandemic hit. SCC America was ready to open car dealerships to sell the Tuatara, which retails for $1.9 million.

Shelby says that the wealth of engineering talent and the state’s aerospace industry were key to being able to create the super car. The company’s first car, the Ultimate Aero, beat the Ferrari Enzo record on Road & Track’s slalom in 2006. It went on the next year to break the production car speed record with two runs that averaged 256 mph.

The company can produce about a dozen Tuatara’s a year. Each car is built to the customer’s specifications. For speed junkies, the car’s engine is 1750 horse, 366 cubic inch V-8 built by Nelson Racing Engines, connected to a seven-speed transmission.

Read all about it in The Seattle Times.

Visit SCC North America to see more about the record-setter.