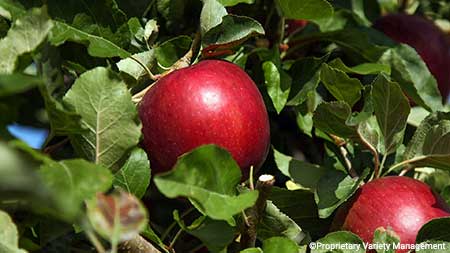 Move over Honey Crisp and Red Delicious. There’s a new apple in town.

Known as the Cosmic Crisp, the Washington-bred apple has been in development for more than two decades and is just reaching supermarket shelves throughout the state this week.

According to Bruce Barritt, the chief horticulturist and developer of the Cosmic Crisp, the apple is a cross between a Honey Crisp and Enterprise, which creates a firm, crisp, juicy apple with a long shelf life. The flavor profile is said to be a perfect balance between sweet and tart. When cut, it tends to turn brown more slowly than most apples, thanks to the influence of the Enterprise side of the breeding equation.

The apple was developed by Washington State University’s world-class fruit breeding program and is the result of years of cross-hybridization between the two original apple varieties. Cosmic Crisp takes its name from the constellation of bright spots that dot its deep red skin.

More than 600,000 Cosmic Crisp trees were sold to growers in 2017. By the end of 2020, WSU officials predict the trees will yield up to two million boxes of apples. Washington growers have a 10-year window of exclusivity when it comes to growing rights. Eventually, the number of boxes harvested by state growers should exceed 21 million.

“From a consumer perspective, it is an ultracrisp, very juicy apple with a good sweet-tart balance – so fundamentally just a good eat,” says Kate Evans, director of WSU’s Pome Fruit Breeding Program “It is a very long storing apple, so we know that it retains its quality pretty well in the evaluations that we’ve done so far and even eats well when it’s a year old.”

Read more about the new apple in the Spokesman-Review.