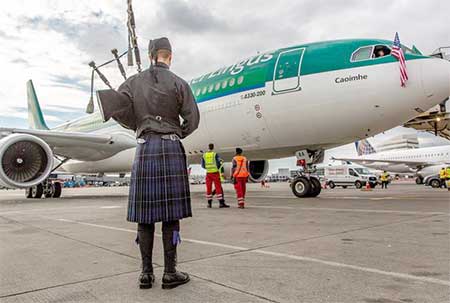 Aer Lingus is the latest international carrier to recognize Washington’s role as an international economic powerhouse. The airline has launched its much anticipated weekly direct service from Seattle to Dublin four days a week. Dublin had been the largest European city not served by direct flights to and from Seattle.

But that’s not the big news. The big news is that the flights will be the first trans-Atlantic flights into Sea-Tac International Airport where passengers clear customs in Dublin, eliminating the need to go through customs in Seattle.

The Monday, Wednesday, Friday and Sunday flights arrive in Seattle at 5:35 and depart for Dublin at 5:35 p.m. The planes are equipped with 23 flat-bed business class seats and 243 economy class seats.