Airforce One: Made in Washington. 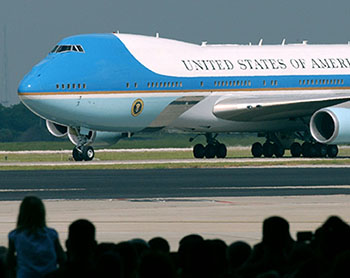 For 53 years all of the Presidents of the United States’ planes have been made in Washington. As the current Airforce One fleet is scheduled for an upgrade they are once again turning to Boeing to make the specialized aircraft. The newly redesigned jetliner will be delivered in 2018 and take several years of testing before it’s put in service as the airborne command center for the most powerful leader of the free world.

The aircraft will be a nearly self-contained flying machine. It must be able to function as a mobile White House and command center for an extended period including an onboard hospital if the country is under attack. The new generation Airforce One will likely have some fighter jet radar detecting and defensive capabilities and sport the latest in secure communications technology.

Washington State has been designing and producing state-of-the-art military and commercial aircraft for over a century. Our aerospace workforce of over 132,500 is the highest concentration of highly skilled aerospace workers in the US. We are proud to be again building the Presidential aircraft.