Electricity and water do mix. 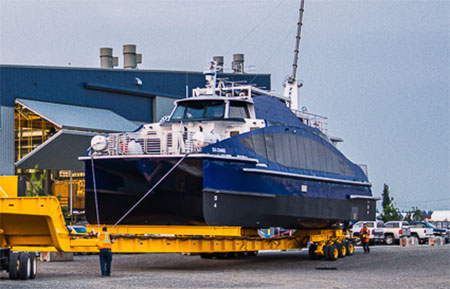 The launch of Sea Change, a 75-passenger emission-free ferry, is a huge step forward for the maritime industry.

The new ship is the first to be fueled by hydrogen fuel cells and electric drive. Built by All American Marine in Bellingham, the new ferry was developed and built to show how zero-emission hydrogen cell technologies could be commercialized in the maritime sector.

Funded by private capital from SWITCH, Sea Change will serve as a testing platform for the new propulsion technology. It will also serve as a proving ground for new regulations proposed by the U.S. Coast Guard, which has been working closely with the company.

The new ferry will be tested in real-world conditions in California’s Bay Area. It is powered by 360 kW Cummins fuel cells and Hexagon hydrogen storage tanks with a capacity of 246 kg. Lithium batteries power two 300 kW electronic propulsion by BAE Systems.

With its state-of-the-art shipyard, All American Marine is a leading builder of hybrid-electric vessels and is embarking on a new period of rapid growth to build larger, more complex vehicles in this class.

“Hydrogen-fuel cell technology will prove to be a robust alternative to conventional powertrain technologies,” said Ron Wille, All American Marine President & COO. “AAM is continuing our tradition of building vessels on the leading edge of technology using advanced propulsion methods, which is why we are so proud to have completed construction on such a revolutionary vessel.”