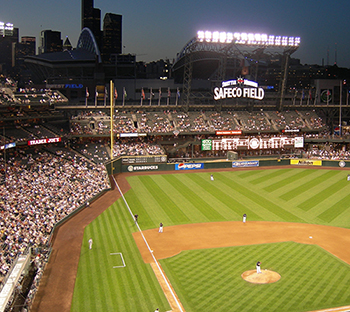 The Mariner’s playfield is always green, but now the stadium itself is going green. The Mariners are the first major league baseball franchise to install LED lighting in their stadium. The switch from halide fixtures to LED lights will reduce energy consumption by 60 – 70% and at the same time reduces glare and shadows.  The benefits may reach beyond reduced power bills. The Washington-based company, PlanLED is installing the new lighting at the ballpark and has already upgraded the lighting in locker and training rooms. They are also studying the long-term benefits on player energy levels and performance. They have made lighting upgrades at many large warehouse facilities like Boeing, Costco and Amazon. PlanLED’s mission is to create ideal lighting environments for humans.

From the Governor’s clean energy initiatives to legislative policies and changes at large and small companies, Washington State is demonstrating its commitment to reducing carbon emissions and energy consumption, while increasing the use of clean energy sources. 73% of the states’ power comes from renewable energy sources, including hydroelectric, solar and wind. Washington’s industrial energy rates at 4.2 cents per kWh are 35.2% lower than the national average.

Read more about the Mariner’s LED lighting in Geekwire.