An electrifying new way to fly. 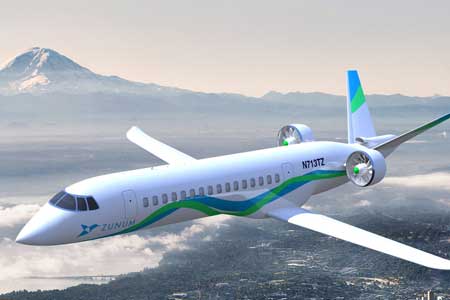 Geekwire has reported that Zunum Aero has started construction of the prototype for the new electric motor that will power the Zunum Aero, slated to be flown for the first time next year.

The revolutionary new aircraft is being developed by the company in the hopes of introducing a new class of regional airplanes, able to fly 700 to 1,000-mile routes on a single electric charge. The initial model will seat 12 passengers in a traditional cabin layout or nine in premium seating. Maximum cruising speed is 340 mph and the operational ceiling is 25,000 feet.

Boeing’s HorizonX venture capital arm and JetBlue have invested in the project along with smaller investors. The Kirkland, Washington company also benefited from an $800,000 grant from Washington State’s Clean Energy Fund, The first all-electric aircraft are expected to enter service in 2022.

“We are excited that the Washington Clean Energy Fund is joining Boeing HorizonX and JetBlue Technology Ventures to support our development of breakthrough hybrid-­electric aircraft for the early 2020s,” Zunum Aero CEO Ashish Kumar said. “This support will extend Washington leadership to a new era of aviation, and pave the way to green, quiet skies,” Kumar said. “Our hybrid aircraft will also benefit all of us across the state, offering door­‐to­‐door travel two to four times faster than today and affordable service to many of the 64 federally supported airports in Washington.”