From trash to treasure. 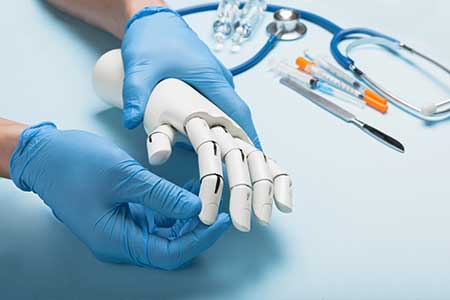 Experts estimate that 28 billion pounds of plastic are dumped into our oceans every year. Some predict there could be more plastic than fish by 2050.

The Million Waves Project hopes to turn some of that pollution into prosthetics. Approximately 40 million people in developing countries are in need of prosthetic limbs, and the plastic found in the oceans provides a ready and unfortunately, inexhaustible, supply of raw materials for this innovative non-profit startup.

Chris and Laura Moriarty, the founders of the non-profit Million Waves Project, came up with the idea as they strolled the beaches near their home in Anacortes, Washington. Troubled by the amount of plastic washing ashore, they connected the dots, turning trash into treasure in the form of 3-D printed upper-limb prosthetics using plastic found in the ocean.

It takes about 30 bottles to make a prosthetic hand, say the founders. The cost is about $45 per limb, which is funded through donations on their website.

The process is fairly straightforward. The bottles are first shredded, then the plastic is processed into granules that can be used to make filament for 3D printers. In the beginning, this process was very time and resource intensive as the couple used a paper shredder to process the plastic bottles. But the project found a great partner in GreenBatch, which specializes in turning recycled plastic into the 3D filament.

Partnerships have given the non-profit a quick boost. Shell’s Puget Sound refinery gave the organization a $5,000 grant to buy a new machine that can turn recycled plastic into filament that is prosthesis grade. e-Nable, an Oregon non-profit, has a network of 2,000 volunteers available to assemble prosthetics, freeing up the Million Waves team to do research and development on new products and refine existing ones so they can operate in a variety of climates and conditions. The company hopes to be able to scale operations so they can produce thousands of limbs a year.

The Million Waves Project is a great example of organizations that are increasingly aligning their business models with pressing social issues. It’s a hallmark of Washington’s close connection to the environment, sustainability and innovation.