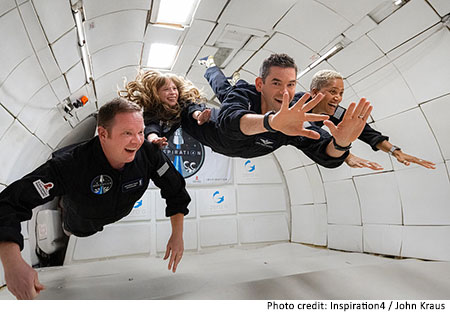 If everything goes as planned between now and Sept. 15, Everett resident Christopher Sembroski will become part of space history.

One of four crew members aboard SpaceX’s Inspiration4 mission, Christopher will be the first of a new generation of civilian astronauts, paving the way for private exploration of space.

It’s that kind of pioneer spirit – to go boldly where no one has gone before – that typifies our residents and permeates every inch of our diverse economy.

Along with Chris on the three-day orbital mission will be tech billionaire Jared Isaacman, CEO of Shift4 Payments, pilot Sian Proctor, and cancer survivor Hayley Arceneaux, who will serve as medical officer. The team will conduct a variety of science experiments, including the effects of zero-gravity on prosthetics (Hayley has a special implant in her leg due to her bout with cancer).

If you watched the Super Bowl in February, you may remember the Twinkle, Twinkle, Little Star commercial that set the mission in motion as Isaacson sought three adventurers to join him on Inspiration4, each representing an idea: Prosperity, Hope and Generosity. Chris was selected after a friend of his who was originally selected bowed out, handing the assignment to Chris who is a reliability engineer for Lockheed Martin.

Fewer than 600 people have been to space since the 1950s. According to Chris, he would have had a better chance of playing in the NBA than fly in space before the Zoom call came in that changed his life forever.

Since March, the crew has been in training at SpaceX’s facility in Hawthorne, California. This included being measured for a spacesuit, taking turns in the centrifuge, physical fitness training and a ride in the “Vomit Comet,” which exposes the soon-to-be astronauts to zero gravity.

Each member of the team has their own call sign. Chris is Hanks, in a nod to Tom Hanks and his role in Apollo 13. Dr. Proctor is Leo, Hayley is Nova and Jared is Rook.

Fittingly, “Hanks” served as a Space Camp counselor 20 years ago at the U.S. Space & Rocket Center in Huntsville, taking campers on simulated Shuttle missions to expose them to possible STEM careers.

“Many of our children who come to Space Camp want to be astronauts,” said Pat Ammons, Space Camp’s senior communications director. “As commercial space develops, this is sort of a hope to all those who carry that dream.”

Inspiration4 is the first of many civilian-crewed missions. Not only was the inaugural mission designed to blaze a new path in civilian space exploration, but also served as a major fundraiser for St. Jude Children’s Research Hospital, which received more than $200 million in donations in a unique partnership between philanthropic and private enterprise.

Learn more about the mission…