Sub Pop: The sound of music for 30 years. 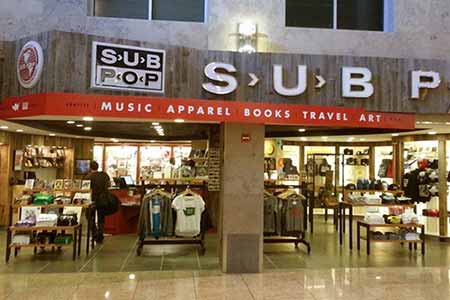 If you fly through Seattle-Tacoma International Airport, you may think it a bit strange to see a record store there. But Sub Pop Records is much more than a record store. It’s an integral part of Washington’s legendary music scene.

Sure, Washington gave the world The Kingsmen of Louie, Louie fame, Heart, Jimi Hendrix and Sir Mix-A-Lot, but Sub Pop put the state’s artists on the world map when grunge came on the scene. Sub Pop Records was the label that started it all.

It’s hard to believe that it’s been 30 years since the iconic music label first opened for business. The label introduced the world to Soundgarden, Mudhoney and Nirvana and managed to change with the times as music aficionados went from vinyl and tape to CDs, streaming digital and not too surprisingly, back to vinyl.

Despite changing tastes and a business model which often left the label teetering on the brink of bankruptcy, Sub Pop has not only found a way to stay in business in a famously fickle industry but gain a reputation for continually being on the cutting edge of the music scene, discovering new artists long before the mainstream.

If you haven’t heard of The Shins, Beach House, Flight of the Conchords or any one of their lesser known acts, that’s O.K. with Sub Pop. They’ll be more than happy to introduce them as you make your way through Sea-Tac airport, making sure that you don’t go home without one of their famous “Loser” t-shirts.

Read more about Sub Pop and its influence on the world music scene.