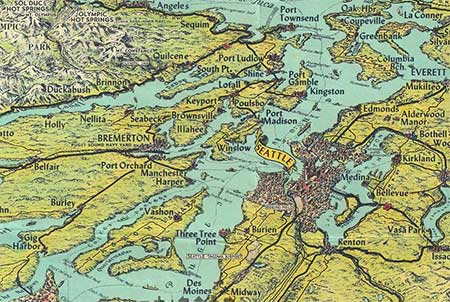 Google Maps doesn’t have anything on John Loacker. His company has been making Washington State maps for more than century now, a craft that has not only stood the test of time, but has also changed with the times.

Today, much of the work is done on computers, but John still knows how to find his way around traditional map making, using a pen, paper and compass to design custom maps of nearly any place on earth you can imagine. The office of the 106-year-old Kroll Map Company is like stepping into a time machine, where maps from the 1930s blend seamlessly with new maps that were created last week. No request is too strange; no project too big or small.

Washington has always been a place of change. Buildings come and go, marked on one of his maps as a mere memory. Each new map shows the improvements and changes of the times, especially in Seattle which has experienced boom and bust cycles of often historic proportions. Mountainous hills were water-cannoned away, muddy tideflats filled with dirt, new businesses started, once major retailers closed, the entire landscape reshaped to fit the ever-changing needs of a growing region.

John is the third-generation mapmaker for the company. One of the earliest maps at Kroll is a vintage plat of Seattle from 1853, signed by H.L. Yesler, one of the town’s founders. Over the years, the company has created thousands of maps. One of the most popular ones is the Evergreen Playground Map, which is one of the Kroll’s biggest sellers. It includes this Lord Bryce quote: “Neither Europe nor Asia nor South America has a prospect in which sea and woods and snow mountains are so united in a landscape.”

The company is truly a family business. His son, Carl, works the registers over at Metsker Maps at the Pike Place Market. The two companies were at one time fierce competitors, but Kroll bought Metsker in 1999, ending the battle but keeping both legendary businesses alive.

It’s nice to know that even in a world that is changing rapidly, some things remain the same. About the only thing that has changed at Kroll’s offices is a new carpet in the reception area. That and airconditioning, a nod to the continued march of changing technology and changing times.

Read more about the Kroll Map Company in The Seattle Times.