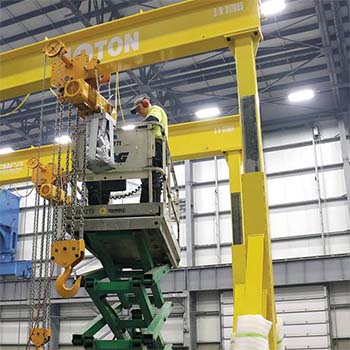 Expansions in Washington State can really pay off for some companies, especially if they are planned and executed well. Such is the case with Wemco Co., a Spokane-area company that needed to triple its production capacity to keep pace with its customer’s needs.

The new Airway Heights facility filled the bill perfectly, allowing the company to triple its production capacity in the new 65,000 square foot space while increasing the size of its workforce and revenue.

For Wemco, the new space means an increased ability to work on large mining and hydroelectric power projects as well as manufacturing equipment for construction, aerospace and agricultural use, including large overhead cranes. The company has the largest capacity of overhead cranes, CNC machines and fabrication capabilities in Eastern Washington.

Poised for exponential growth over the next three years, Wemco plans to add more skilled workers to keep up with demand. This includes mechanical engineers, electricians and computer numerical control machinists.

Find out more about Wemco and their expansion plans in Airway Heights, including a new engineering office so they can design and build their own equipment.