From here to there, to everywhere.

If your company requires a solid transportation network of air, sea, rail and land routes, Washington State is up to the task. Following is an overview of the state’s transportation system and how it connects to the rest of the U.S. and the world.

Located 20 minutes south of Seattle, Seattle-Tacoma International Airport is the state’s largest international airport and ninth busiest in the U.S. It serves as a hub for major airlines offering direct and connecting routes to cities throughout Washington, the United States and the world. Nearly 50 million passengers fly through Sea-Tac annually.

Domestic travelers can also use the new Paine Field terminal in Everett. The airport is served by Alaska and United, offering direct flights to cities along the western seaboard.

In the eastern part of the state, Spokane International Airport serves as the gateway, offering direct service and non-stop to many U.S. cities. Other international airports, such as Bellingham, provide service to Sea-Tac International as well as other U.S. destinations.

King County International, Sea-Tac, Spokane and other cities throughout Washington handle domestic and international cargo routes as well and serve as a base of operations for Alaska Air, Cargolux, China Airlines Cargo, Eva Air Cargo, FedEx and Korean Air Cargo as well as belly service on all major airlines. 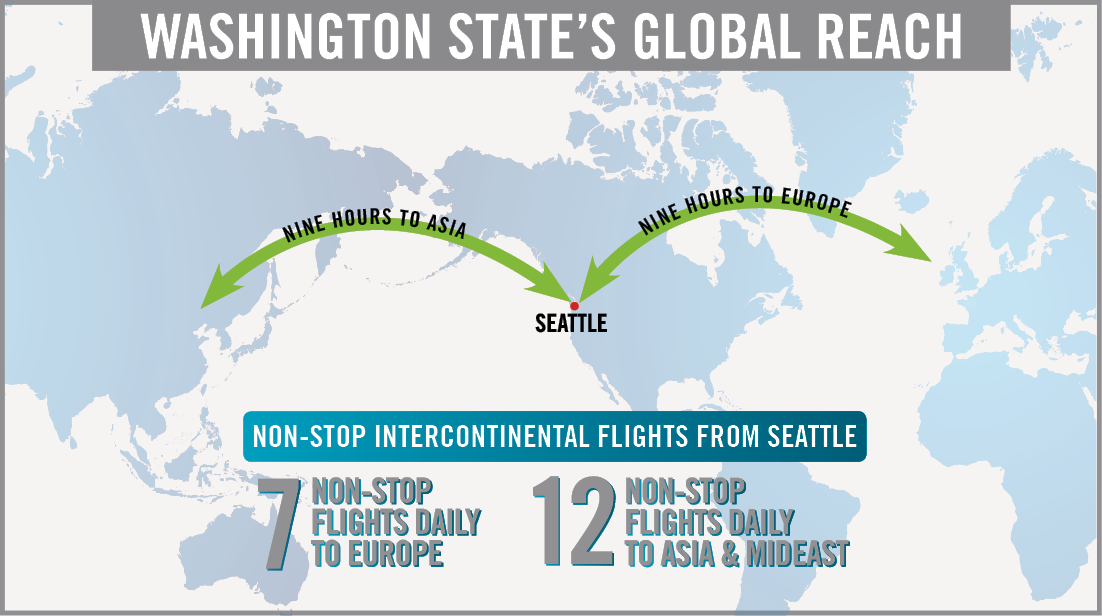 If access to Pacific sea lanes is important, several of Washington’s 75 ports are a day’s sail closer to Asian markets than any other port on the west coast.

The fourth largest container gateway in the U.S., the  Northwest Seaport Alliance includes Seattle’s and Tacoma’s port operations and serves as a major import/export center for bulk, breakbulk, project/heavy-lift cargoes, automobiles and trucks. The combined ports handled more than 3.6 million TEU last year and host 18 international carriers. Two Class 1 railroads link these ports to markets throughout the Pacific Northwest and Midwest. The Northwest Seaport Alliance also serves as a major trade gateway to Alaska. More than 80% of total trade volume to Alaska is handled by these ports.

Need rail? We’ve got you covered there, too! Washington is served by two national railroads, BNSF and Union Pacific, as well as several local lines, ensuring that your goods can be shipped quickly and efficiently by train. There are 3,666 miles of rail in Washington, connecting the state to major markets throughout North, Central and South America and Canada.

Washington’s primary north-south connector is I-5, which runs from the Canadian border to California. I-405 branches off of I-5 just north of Seattle and reconnects south of it, providing access to communities on the eastside.

Highways 2, 20 and 12 and Interstate 90 connect Western and Eastern Washington, traveling through several mountain passes in the Cascades. Smaller highways connect communities along the Pacific Coast and in Central Washington to major freeways.

In 2015, Washington voters made a major investment in transportation. The Connecting Washington program will invest $70 billion in infrastructure projects throughout the state in the decades to come.

Some of the major projects underway include:

Washington operates the largest vehicle and passenger ferry system in the United States. The ferries serve as an aquatic highway that connects communities throughout the San Juan Islands and Puget Sound. The state’s 21 ferries transported more than 23 million passengers and 10.5 million vehicles last year.