When the future came to town. 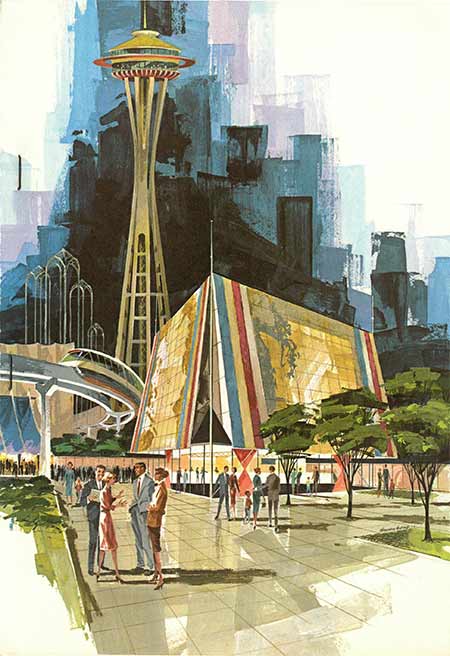 The dustbin of history is littered with famously bad predictions about what the future holds.

And yet, in 1962 Washington State invited the world to Seattle to get a glimpse of the future. The occasion, a world’s fair; the first to be held in the United States in more than 20 years. Known officially as the Century 21 Exposition, the fair put Washington State on the world map. It was a bold risk in a state known for taking risks, one that business leaders, legislators and residents took on with unbridled enthusiasm.

Meet me in Seattle at the fair…

Major companies such as Ford, General Motors, IBM and Bell Telephone all signed on as major exhibitors, as did 35 countries, the new space agency NASA, and hundreds of smaller businesses and vendors. The Department of Commerce did its part too, contributing a theme song by The Lancers. There was even the futuristic Monorail; the first of its kind to enter into regular service in a major city. It would shuttle passengers from downtown to the fairgrounds in just 96 seconds.

And when they got there, Seattle’s version of the Eiffel Tower, The Space Needle, marked their arrival. The 605-foot spire was constructed in just 13 months. It not only became a symbol of the fair, but also the city.

A glimpse into the future

The Space Needle and Monorail weren’t the only glimpses into the future. Century 21 correctly predicted the advent of wall-sized television screens where kids could play video games, the development of cordless power tools, the popularity of audiobooks and digital libraries, and future homes that would be so smart that you could turn the lights or heat on and off with your phone.

Bell Labs showed off new ideas like touchtone dialing, call waiting and call forwarding, features would become the norm a decade later. One third-grader interviewed by a Seattle Times reporter predicted that we’d have telephones in our pockets. No, his name wasn’t Steve Jobs. The house of the future showed off a home computer that would be able to balance the checking account and order groceries from the supermarket.

In the kitchen, families could look forward to heat and serve foods, thanks to the miracles of freeze-drying and irradiation. Food could be boiled in a bag in just minutes (exhibitors missed out on the idea of the microwave) and every member of the family could have their favorite for dinner.

In the library of the future, vast collections would be stored in “information retrieval machines” and facsimile machines would allow documents to be sent over phone lines to other branches or even to someone’s home in a matter of minutes.

The president of Bell Telephone Company, W.W. Straley, seemed to have mystic powers. He predicted the population of the nine counties that made up the Puget Sound region would be 4,320,000 in the 21st Century. In 2018, the population stood at 4,369,625.

“Our present towns,” he said, “will become a continuous metropolitan area. People will not know when they leave one town and enter another.”

A major success and a lasting impression

By almost every measure, the Century 21 Exposition exceeded expectations. It was one of only two world fairs in history that made money. Between April 21 and Oct. 21, 1962, nearly 10 million visitors passed through the gates. Even Elvis Presley showed up, filming It Happened At the World’s Fair with seven-year-old  Vicky Tiu Liu, who went on to become the First Lady of Hawaii. Other famous visitors included Sammy Davis Jr., Lawrence Welk, John Wayne, Vice President Lyndon Johnson, Walt Disney, George Burns and astronaut John Glenn. Even Lassie found time to visit the fair.

After the exposition closed, the city turned the fairgrounds into a city park, the Seattle Center. Visitors to the park today can still see remnants of the fair, including the iconic Space Needle, Key Arena, which was the Washington State Pavilion during Century 21, the Science Center, which served as the United States Science Exhibit, and the venerable Monorail, which still connects the downtown core with the Seattle Center.

Perhaps more important, the world’s fair put Seattle and Washington State on the map. No longer a remote outpost in the northwest corner of the United States, the region became an economic juggernaut and center for international trade. It helped spawn fresh ideas, new innovations and bold companies that have gone on to change the world. This was something no one in 1962 could predict: the future of one of the world’s most beautiful, diverse and eclectic metropolitan cities.