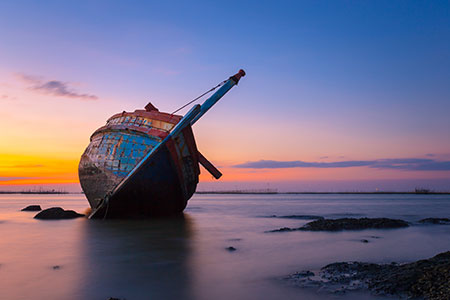 It’s been long said that a boat is nothing more than a hole in the water you put money into. But who puts the money into it after years of neglect or worse, it becomes a hazard to navigation?

Washington’s Department of Natural Resources (DNR) is not only looking for new ways to recycle these lost treasures, but also turn them into a new business opportunity in rural communities.

Through DNR’s Rural Communities Partnership Initiative, the Port of Ilwaco has plans to build a new recycling center to handle recycled boats. Instead of an expensive haulout and tow to Port Angeles, the port is using a $95,000 grant from the DNR program to build an indoor vessel dismantling facility that can handle large boats while controlling pollution at the same time.

The port is the testing ground for this new method of handling derelict and abandoned vessels. With more than 800 boats berthed in its marinas, Ilwaco knows something about abandoned boats. In the past, they have worked with DNR to remove them the traditional way, shipping them to another nearby port, which can cost anywhere from $20,000 to $2 million, depending on the size of the ship and the complexity of the salvage.

Recycling can turn this trash into treasure instead. Rigging and fittings are prized by shipwrights and the timbers and planks, often crafted from old-growth timber, can be repurposed and resold. Even the fiberglass in new boats can be ground up and used for jersey barriers on highways.

The recycling effort may be a boon for rural communities looking for new industries. In Ilwaco, the port will work with a private business to create the recycling center. If it proves its worth, others will undoubtedly follow, as DNR has identified more than 160 boats on public lands that are either hazards to navigation or the environment. There are even more on private lands, which are outside of the agency’s mandates and fall under U.S. Coast Guard or other state and federal regulations.

This isn’t the only Rural Communities Partnership Initiative grants handed out to rural parts of the state. Three other communities in Southwest Washington also received grants. The Kalama School District received on to create a forest management learning lab, a grant for Pacific and Gray’s Harbor counties will fund a new research program to control burrowing shrimp, which are affecting oyster beds, and a grand for Raymond will help revive an old sawmill to provide hardwoods from sustainable alder forests.

Read more in this report from Oregon Public Broadcasting.