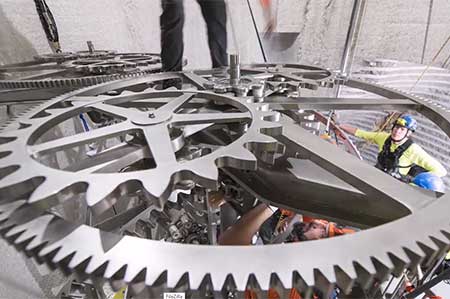 The clock, which is being built deep inside a mountain in West Texas, has a lot of Seattle connections. Notably, Amazon founder Jeff Bezos started the project with a $40 million investment. Two other Washington companies designed the stone cutting machinery that allowed workers to cut the 500-foot deep shaft in the rock that will house the clock when it is completed as well as clock parts.

Bezos hopes the 10,000 Year Clock will serve as an icon to fostering long-term thinking and is made to last for centuries. Future generations will undoubtedly ponder its craftsmanship as much as its meaning, like a modern-day Stonehenge.

The Seattle connection even deeper, if you’ll pardon the pun. Seattle Solstice and Machinsts Inc. have both provided their support. Seattle Solstice provided the cutting equipment that sawed the spiral staircase out of stone in the clock shaft and Machinists, Inc. machined some of the parts for the clock itself. It’s rumored that Seattle science-fiction author Neal Stephenson also contributed some ideas on how to build a clock for the ages.

The 10,000 Year Clock won’t be finished for several years and is so remote, that visiting it would require an arduous journey. But online adventurers can visit the clock’s website.

Watch the mesmerizing installation video below and read more about the clock in Geekwire.