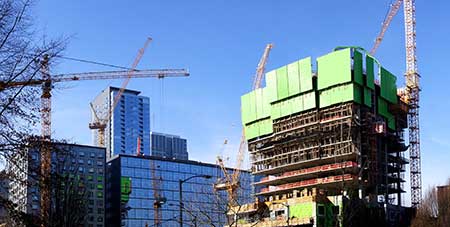 Looking at all the construction cranes dotting the skyline, it’s hard not to notice that there’s a technology boom going on in Seattle right now. But a new report by the real estate firm CBRE confirms it, noting that an astonishing 93% of all downtown office jobs in the last two years are technology-related positions.

Yes, it’s well-known that Amazon has been a big part of that story. But 100 out-of-town technology companies also tell the tale, generating 23,575 new jobs in 2015-16. This includes such stalwarts at Google, Facebook, Apple, Twitter and Salesforce, which are also putting their fingerprint on the city’s evolving skyline.

The report shows that 145,356 people in Seattle are employed in software and services, roughly 38.1% of all office jobs. A wealth of local talent is being supplemented with newcomers; approximately 1,100 new residents arrive each week to the area.

Even so, office space costs are relatively affordable compared to other hotspots like New York and Silicon Valley. According to the report, Seattle was 10th in office rent growth. The average asking price for office space was $32.45 per square foot, far less than San Francisco’s $72.90. Lots of new space is on the way too. According to CBRE, seven million square feet of new office space is under construction in Seattle.

The Bay Area is the top tech region in the country still, but the Puget Sound region is nipping at its heels.

Read more about the study’s findings in Geekwire.