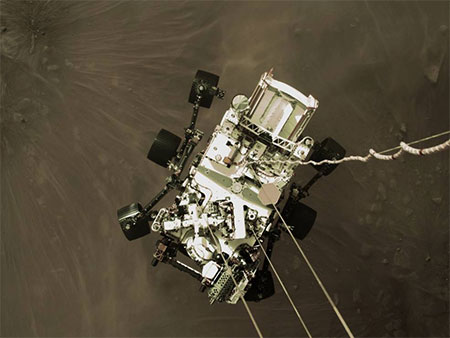 As NASA likes to say, landing on Mars is “seven minutes of terror.” But Perseverance was in good hands all along, thanks to the rocketry wizards at Aerojet Rocketdyne in Redmond.

After hitting the atmosphere at 12,500 p.m., eight Aerojet Rocketdyne MR-107U thrusters helped stabilize the spacecraft as it began to slow down enough to deploy its supersonic parachute. As Perseverance neared the surface, eight MR80B throttling thrusters on the descent state brought the craft to a stop above the Martian surface, allowing the sky crane to lower the one-ton Perseverance safely to the floor of Jezero Crater.

This is hardly Aerojet Rocketdyne’s first Martian rodeo. The company has been part of every successful NASA mission to Mars since the Viking program in the 1970s. This included a similar landing system for Curiosity, which landed on Mars in 2012 using a sky crane.

The Perseverance mission upped the ante significantly, choosing what is believed to be a dried lakebed as its landing site. The spacecraft self-selected its landing spot based on the terrain, managing to land just 1.7 kilometers from its predicted landing zone. Rougher and far more precarious terrain flanked the spacecraft on either side.

The Redmond rocket factory also produced the reaction control system thrusters for Atlas V’s Centaur upper stage. The 12 MR-106 thrusters controlled the pitch, yaw and roll control for the booster, which helped Perseverance leave the pull of Earth’s gravity so it could continue on to Mars.