A match made in…uh, Seattle.

Washington’s culture of creativity and cross-pollination has done it again. Two of the state’s business legends, Amazon and Microsoft, are teaming together to make sure their artificial intelligence (AI) digital assistants can communicate with one another. The partnership, announced Aug. 30, will allow the Alexa and Cortana to summon one another with just a few words, leveraging their unique capabilities to blend AI into a seamless user experience that mixes business with pleasure.

For the last year, Amazon’s Jeff Bezos and Satya Nadella of Microsoft, have had their teams working on the framework for the technology that will allow the two systems to interact. It’s a bold move in a crowded space where Apple, Google and others are working on competing platforms, such as Apple’s Siri digital assistant.

As an example of how the integration would work, Bezos talked about Cortana’s close connection to Outlook and how Alexa would be able to call up a person’s meeting schedule with his or her boss using their Alexa device at home. Users of both devices should be able to experience the new connectivity beginning in the fall of 2017.

The partnership began in 2016 at the annual Microsoft CEO Summit in the Seattle area. Bezos brought up the idea and Nadella was receptive. After working on a draft brief of how it the working relationship could function, work was begun on the project in secret.

With hundreds of information and communication technology companies in the greater Puget Sound region, collaboration and cross-pollination is a natural part of the ecosystem, not only between ICT companies, but businesses in other sectors such as aerospace, clean technology, space, life science and advanced manufacturing.

Read the article in the New York Times to learn more about this historic partnership. 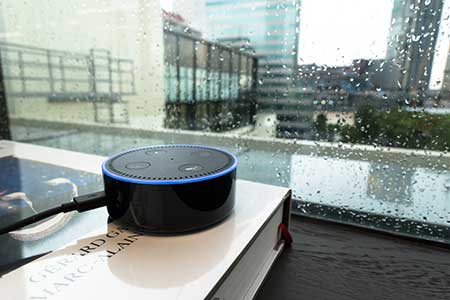