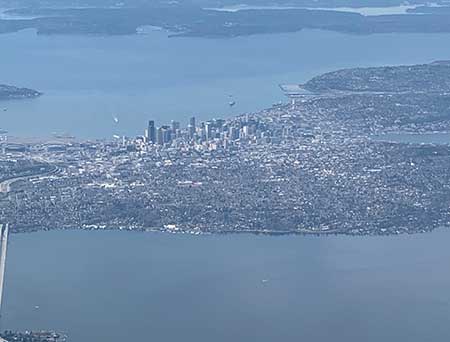 Yes, Silicon Valley is still the darling of the tech world. But nipping right at its heels is a state just to its north, Washington. Together, these two states have solidified the Pacific Coast as an economic juggernaut and stronghold of technological innovation and advancement.

“Companies like Microsoft, Amazon, Apple, Facebook, Intel and many others are global names that are changing the way we live our lives but are also providing economic stability and incomes to new generations of workers,” says Lisa Brown in a recent Area Development magazine article. “The emergence of the tech industry in North America, greatly positioned on the West Coast, has been and continues to have a gigantic impact on the economy, particularly in Seattle, Portland and Silicon Valley.”

Technology and the role the Pacific Coast is playing in its advancement and proliferation is probably one of the biggest economic stories of the 21st century, says Brown.

Tech companies flourish in cities with strong cultures of collaboration with vibrant startup communities. A good example of this type of success is Zipwhip. Looking for a larger space for its headquarters, Seattle was a natural choice. The company knew it needed “to stick around Seattle,” said CEO John Lauer. “There’s no better city to be a startup in right now — the tech community here is so supportive of companies like us, and you really don’t find that everywhere.”

Washington is fortunate that the perfect storm for economic growth grew organically and over time. Tech titans such as Microsoft and Cray set up shop next to seasoned manufacturing firms such as Boeing and Paccar. As workers left these companies, they started new enterprises, exploring ideas that blended the best in manufacturing, materials and technology. This, in turn, spawned other companies to expand into emerging sectors such as life science, clean technology, advanced manufacturing and commercial space.

Washington continues to set the pace today, particularly in the area of clean technology. The state’s legislature mandated that 100% of Washington’s energy portfolio come from clean sources by 2045 and companies like Microsoft and Amazon have followed suit, developing strategies to be net-zero in carbon output. Other companies are leading the way in grid management, power storage technologies and more efficient batteries.

The Pacific States also provide a workforce with a diverse skill set, says Brown. “This region collectively offers a highly-skilled workforce in a variety of disciplines of study or certification. For companies that have a need to hire engineers or scientists, as well as production workers with experience in a wide array of manufacturing settings, we have a lot to offer.”

Proximity to new and emerging markets is another competitive advantage. Washington is equidistant between Asia and European markets and the state’s economic development teams have been forging strong relationships with China, Vietnam, India, Japan, Spain, Norway and the United Kingdom.

“The market access to Asia-Pacific is critical to the region and will only continue to increase in its importance as economic growth and advanced technology R&D continue to accelerate in those markets,” Brown explains.

This proximity to major markets bodes well for the state’s agriculture and food manufacturing sector as well. Washington produces more than 300 different crops and is the #2 wine producer in the United States.

Quality of life continues to be a major draw, says Brown. “Quality of life is…an important part of the equation, as studies show that employees who can achieve an appropriate work-life balance and develop an active lifestyle outside their employer relationship are more productive while at work and turn over less — which saves money for employers.”