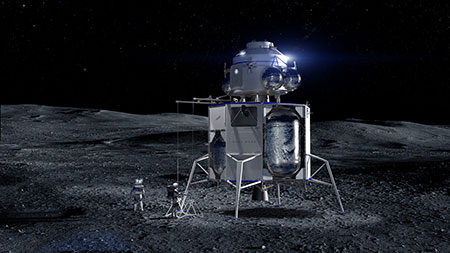 Blue Origin’s workforce stood at about 600 three and a half years ago. Today it is at 2,500 and heading toward 3,500 next year. The company has long said it’s been running out of space at its Kent headquarters. But soon, the company will have a lot more space to work with, thanks to a major expansion that is nearing completion.

The roughly 400,000 square foot facility taking shape next to the company’s existing production factory recently got an exterior paint job and parking lot striping as it nears completion.

The new space, which should open in 2020, will allow Blue Origin to continue engineering work on the BE-4 engine prototypes, the New Glenn rocket, production of the BE-3 engine that propels the New Shepard and research and development for the New Glenn and Blue Moon lunar lander.

After rigorous testing, the New Shepard spacecraft should take its first space tourists for a ride in 2020, ushering in a new age of space travel and exploration. The New Glenn is slated to begin testing in 2021.