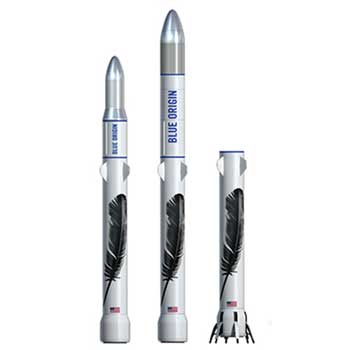 The New Glenn, named after astronaut John Glenn, will be the biggest, most powerful rocket built since the 1960s moon missions, says Jeff Bezos, founder of Blue Origin and Amazon.com.

The multi-stage rocket, to be launched from the company’s Cape Canaveral facility, uses the new BE-4 engine being designed and built in Kent, Washington. Each rocket has a projected thrust of 550,000 pounds, meaning the New Glenn’s seven engines should put out 3.85 million pounds of thrust at launch. The New Glenn will have a two and three stage configuration, which is shown in the illustration next to the first stage, which will be able to land autonomously on land, similar to Space X’s Falcon 9.

The new rocket’s first flight will be by the end of the decade, said Bezos, who hinted at a bigger rocket also on the drawing board, New Armstrong.