Either way that’s a lot of bread.

The community of Rosalia in Whitman County may be small – population about 565 – but it’s a major player in the international grain markets.

According to the Washington State University Extension Office, Whatcom County is the highest wheat-producing county in the United States. The grain harvested there has quite a journey in store, too. From the wheat fields around communities like Rosalia, the wheat makes its way to Portland, Oregon in 110-car trains. From there, it’s off to the Far East, where it’s made into bread, crackers and noodles.

Part of the region’s secret to its robust production of wheat is the weather. Farmers in the area use what is known as dryland farming, where Mother Nature serves as the irrigation system. Rain and the area’s fertile soil are a perfect storm for record wheat production.

Roughly 90% of the wheat harvested is shipped to Japan, South Korea and other Pacific Rim countries. Each shipload is more than two million bushels of grain, about 54,431 metric tons.

No matter how you slice it, that’s a lot of bread. 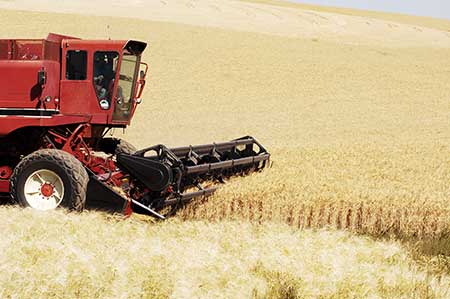