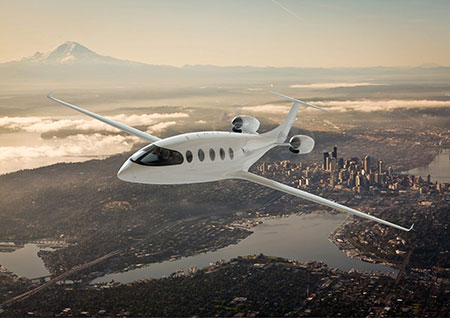 The word “audacious” could be used to describe Alice and the innovative aerospace industry in which the new electric plane is taking shape. Under construction just north of Seattle, Eviation’s new electric aircraft not only promises to up the game in zero-emission passenger flights but cargo delivery too.

Washington has become a hotbed of experimentation and innovation in electrified craft of all types. Eviation’s new Alice combines state-of-the-art aeronautics and recent advances in electric motors. Its propulsion partner, magniX, is also headquartered in Washington State. It recently received a $74.3 million award from NASA to further refine its technology to scale to larger aircraft.

DHL Express has announced an initial order of 12 new Alice aircraft to fill its goal of reducing its carbon footprint. The plane, which has a range of 440 nautical miles, will connect the company’s hubs with its fleet of delivery vans in communities across the U.S.

Scheduled to take its inaugural flight later this year, Alice only needs 30 minutes or less to charge for each hour of flight. The plane is powered by two magniX 650 motors, which produce 640 kW of power each. Alice’s top speed is 250 knots. The aircraft has a passenger payload of 2,500 lbs. or 2,600 lbs. of freight.

The first test aircraft is under construction at the company’s hangars at Arlington Airport. As the design was further refined, Eviation shifted to a T-tail to replace the original V-tail to improve handling characteristics and optimize performance. At the same time, the electric motors were moved from the wingtips to a pylon arrangement on each side of the tail.

“From day one, we set an audacious goal to transform the aviation industry and create a new era with electric aircraft,” explained Eviation CEO Omer Bar-Yohay at the time of the DHL announcement. “Partnering with companies like DHL who are the leaders in sustainable e-cargo transportation is a testament that the electric era is upon us.”