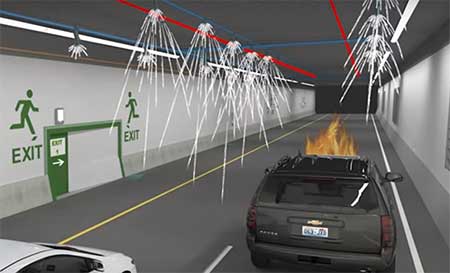 Finally, there’s light at the end of the tunnel. After years of work and a few setbacks, the new tunnel that cuts under downtown Seattle to connect the southern and northern parts of the city is finally slated to open by the end of the year.

Not only is it a marvel of boring technology (the boring machine was 55-feet in diameter), but the new tunnel is also a high-tech wonder of connected systems and sensors.

It is probably the smartest tunnel in the United States, able to sense any issue quickly and apply the right solutions in moments – whether that means more fresh air in a traffic jam, fire suppression in a specific location, or emergency evacuation through a network of exits and pressurized safe zones.

When it opens in the fall, the new tunnel system will feature 300 cameras to monitor traffic and security. If a situation develops, automatic ventilation systems kick on to keep fresh air flowing in while venting out any automobile exhausts or smoke from a car fire. Digital signage can direct drivers to alternate lanes and a network of sprinklers can apply water to a fire to a specific zone instead of flooding the whole tunnel. The entire length of the northbound and southbound tunnel is under continual observation by a traffic monitoring team to ensure a smooth flow of traffic and a quick response to any incident day or night.

Once the tunnel is in operation, the old Viaduct will finally be torn down, creating new development opportunities along the waterfront and removing a structure that was considered an eyesore.

Check out the video that demonstrates the many features of the smartest tunnel in the country. It’s all on Geekwire.