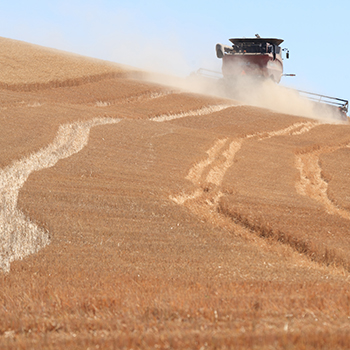 Eastern Washington harvests millions of tons of wheat to feed the world. In the process, it leaves behind 4 million tons of unused wheat straw. Renton-based Sustainable Fiber Technologies has developed a process for turning that waste wheat straw into pulp for a variety of traditional and non-traditional end uses. A new pulp mill is being built in the heart of the wheat growing region giving farmers additional revenue beyond the traditional wheat harvest. It would reap environmental benefits as well, reducing the need for field burning to remove the waste straw. Read more about the new pulp mill in Columbia County, Washington, in The Seattle Times.

Ranked fifth in the nation’s top wheat producing states, Washington is one of the nation’s leading wheat-exporting states. In Southeastern Washington’s Palouse region over 2.2 million acres are dedicated to growing wheat and in 2016 produced 157,290 million bushels. There are over 300 crops grown in Washington State. Everything from spearmint oil (we’re #1 producer in the country) to fruit crops, including apples, cherries and pears, to wheat and hay, to wine grapes and hops generates 13% of the entire state’s economy.