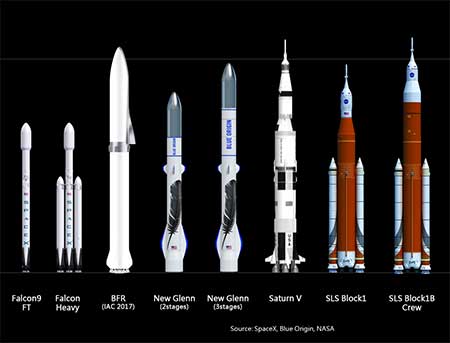 If you think Blue Origin is content with space tourism as a business model, check out their New Glenn platform. Named after the first U.S. astronaut to orbit the Earth, the new rocket is now under production with a first test flight scheduled for 2020.

Toward that end, the company has released some more details of the massive rocket, which will be similar in scale to the Saturn V rocket that powered the Apollo moon missions.

The New Glenn is being designed to carry cargo and humans to orbit. The two-stage version will be able to lift 14 tons of cargo to geostationary orbit and 50 tons to low Earth orbit. Building on lessons learned by the company’s smaller New Shephard launch system, the first stage will be able to land on a ship at sea, reducing flight costs and increasing reusability. SpaceX uses a similar concept for their Falcon line of rockets.

The New Shephard has the honor of being the first system to land its first stage back on solid ground. In contrast to SpaceX, Blue Origin plans to use a ship instead of a barge as its landing site, feeling that a ship offers more maneuverability and stability. The company has already signed on its first customers and the New Glenn will compete with United Launch Alliance’s Vultan and Delta IV Heavy as well as Space X’s Falcon and Falcon Heavy when it comes online.

The rocket is powered by the company’s new BE-4 engines, which are being built in Kent, Washington, the company’s headquarters. Design work on the New Glenn is also being conducted there, thanks to Washington’s bountiful supply of aerospace and propulsion engineers and decades of know-how in space systems.