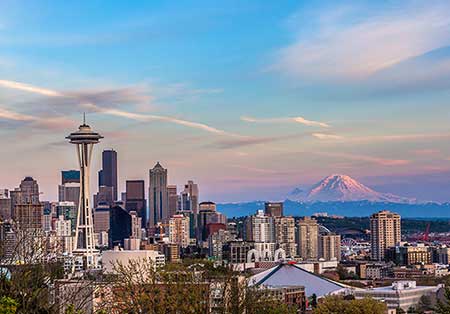 Business pundits love to kick a bustling economy when it’s down. But the future of the Puget Sound economy is showing astounding resiliency no matter what labels prognosticators want to throw its way.

Bloggers and columnists are trying to paint an economic future that is as bleak as the region’s famous 1970s meltdown when Boeing laid off thousands in the wake of the supersonic transport project cancellation. And yet, recent investment figures tell a very different story.

Venture capitalists continue to invest heavily in Pacific Northwest tech companies, says Geekwire. One of the biggest tech funding deals in the region’s history – $821 billion – was for Seattle’s Sana Biotechnology.

Goldman Sachs showed its confidence, snapping up the prestigious top floor of Rainier Square’s new 58-story tower in the heart of downtown Seattle. A South Lake Union tower sold for $320 million to a Toronto investor and Adaptive Biotech is building a 100,000 square foot campus on Eastlake.

More is on the way. Vulcan has announced a new South Lake Union development, and Unico announced a plan to redevelop eight buildings in Pioneer Square. California-based developer Alexandria recently announced a $62 million purchase of land in the SODO district for new offices and labs for biotech companies. On the Eastside, four towers with 2.8 million square feet are under construction. Amazon has already leased two and is expected to lease at least parts of the other two.

Of course, none of this makes up for the overwhelming hurt small businesses and street-level retailers are feeling right now as they weather the pandemic and social unrest. Still, the blistering pace of investment in the Puget Sound region clearly demonstrates that the rumors of the region’s demise as an economic powerhouse are greatly exaggerated.

See more in The Seattle Times.