Robots at the core of this year’s apple harvest. 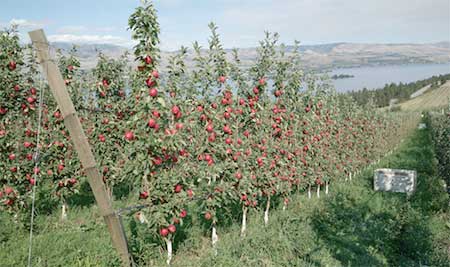 If you’re driving through apple country in Washington this fall, don’t be surprised if you end up doing a double take.

No, it’s not your imagination and those aren’t invaders from another planet trying to steal Washington’s prized apples.

They’re robots, designed to harvest apples because there aren’t enough workers to do the job anymore.

The idea of robotic harvesting has been six years in the making. It started with a shortage of labor followed by a corresponding increase in wages (the old supply and demand problem). Faced with already thin margins, growers became open to the idea of robots.

The robots use machine learning to identify each apple, assess its readiness to be picked, and then pick it, taking care not to bruise or damage the fruit at any step along the way.

To ready the orchards, growers had to start shaping the trees so they were skinnier and easier for the robots to work around. They even managed to increase the per acre yield, thanks to new apple trees that were shorter and fuller, producing twice the fruit per tree. Now that the orchards are much more uniform, the robots can get to work this fall in their first full-scale test.

The makers expect that the robots will be able to harvest about 60,000 apples this fall. At full production, they should be able to harvest 727,000 units by 2025 as the technology is refined and growers start to see a return on their investment.

Read more about robots in state orchards in Geekwire.