Seahawks fans have another reason to celebrate. 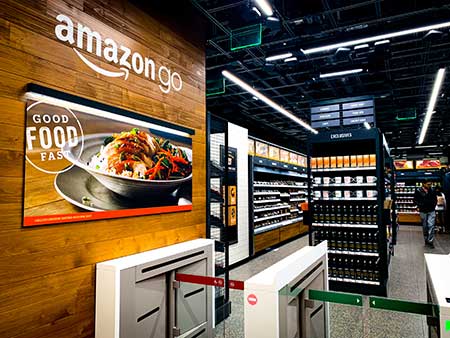 Russell Wilson’s memorable performance at Lumen Field wasn’t the only thing fans could celebrate on Monday Night Football. The home of the Seahawks also got its first Amazon Go store, where the 12s can load up on beverages and food without waiting in line to cash out.

The store uses Amazon’s cashierless “Just Walk Out” technology, which Russ may have wanted in the pressroom following his 17-16 loss to his old team. The new District Market, located across from the Fan Deck on the stadium’s south end, uses Amazon’s palm scanning technology, making Lumen Field the first NFL venue to feature it.

No more waiting in endless lines at the concession stand as you hear the crowd roaring “GE-NO” over and over at the top of their lungs. Fans simply scan their palms or credit card as they walk in, pick up what they want from the store, and walk out in the time it takes Pete Carroll to throw a red hanky on the field.

Fans of the Mariners and Kraken are already used to the technology, as both Climate Pledge Arena and the Mariners’ T-Mobile Park both have similar stores. Other sports arenas are now playing copycat around the country, finding that grab-and-go food and beverages enhance the fan’s experience, even if the team is in the cellar.

Similar to Amazon Go stores, the District Market uses overhead cameras and sensors to track purchases. Pick something up; it goes in your “basket.” Put it back, and the basket empties. All done shopping? Walk out of the store, and your purchases are added to the credit card you scanned as you entered, or if you have an Amazon One account, the one that is attached to your palm print.

What will those Washington State geniuses think of next?