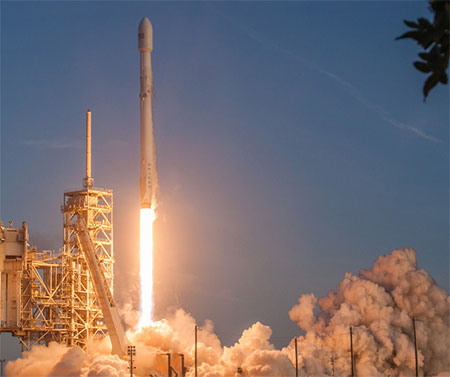 Washington’s commercial space cluster is about to experience a new test of its engineering and design prowess with the launch of two prototype satellites this month.

If everything goes smoothly, the Redmond-based SpaceX facility will put the first of thousands of satellites into space, forming a global constellation around the earth that, when complete, will provide global Internet connectivity.

The two spacecraft, known as Microsat 2a and 2b, will be riding piggyback on a mission to send a Spanish radar observation satellite known as Paz. The launch from Vandenberg Air Force Base is slated for Saturday, Feb. 17.

The SpaceX satellites will be testing a Ku-brand radio communication system, which will connect to an array of ground stations, including two in Washington State – one at SpaceX’s Redmond facility and another in Brewster, which is in Eastern Washington.

If successful, the company plans to launch thousands of these satellites into orbit in the years to come. The satellite constellation, often referred to as Starlink, will provide low-cost Internet access when it is fully operational. Limited service is slated to begin in 2020.

SpaceX Redmond is taking the lead on the development of this new generation of satellites, building on Washington’s nearly half-century of space know-how and technology expertise, dating back to the Apollo program.