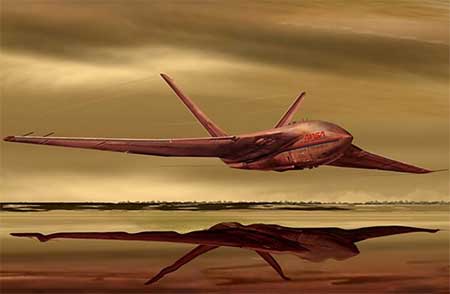 A flying boat skimming the lakes of Saturn’s Titan moon? Impossible, you say? Well, we’re sure that the lunar rover astronauts drove around the moon was pretty outlandish when Boeing proposed it to NASA in the 1960s.

The uncrewed TitanAir probe was one of three Washington State projects to net Phase 1 grants from NASA’s Innovative Advanced Concepts program, or NIAC, for all you acronym lovers out there.

The Titan probe was proposed by Planet Enterprises in Gig Harbor. The idea calls for building a winged craft that can fly through the dense atmosphere of Titan, a largely aquatic moon of Saturn. While in the air, probes on the wings can simultaneously sample the air and water from the lakes, which are believed to consist of methane and ethane. Quinn Morley, Planet Enterprises founder, is working with engineers at Washington State University and Purdue to design the craft.

Ultra Safe proposes to modify the EmberCore radioscope battery to create a powerful beam of X-ray or gamma-ray light. The beam would be able to identify substances on other planetary surfaces from a great distance, such as frozen water deposits at promising lunar sites. The EmberCore Flashlight would be the most powerful light source used on space missions.

Last but not least is a proposal from Positron Dynamics. Started by former Blue Origin engineer Ryan Weed, the company will use the grant to study the feasibility of a radioisotope positron propulsion concept. This involves embedding fuel particles for a nuclear fission fragment rocket into an aerogel, one of the lightest substances on the earth that has a physical form. If it works, the propulsion system can send probes and telescopes on missions that are billions of miles from the earth.

NASA Administrator Bill Nelson said the NIAC program helps give “forward-thinking scientists and engineers the tools and support they need to spur technology that will enable future NASA missions. NASA dares to make the impossible possible. That’s only achievable because of the innovators, thinkers and doers who are helping us imagine and prepare for the future of space exploration.”