Two, two planes in one. 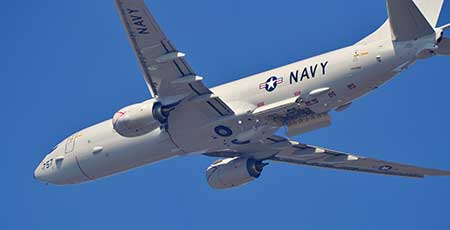 Every month Boeing is cranking out 47 737’s in its Renton facility.The three production lines hum with activity day and night. But what most people don’t know is that there is a fourth production line which not only showcases Boeing’s own production skills, but the skills of Washington’s aerospace workforce and supply chain as well.

While similar in appearance to the 737 that is the workhorse of many airlines, the P-8 Poseidon is armed to the teeth with weapons, electronics and technology. Its mission is to hunt submarines and if necessary, intercept and engage them.

What’s truly remarkable is that this version of the 737 is produced right along its commercial cousin. All the structural changes necessary – from the thicker skins and reinforced wings to the weapons bay and large picture windows – are integrated into the build rather than after the fact. It is an impressive feat of production design that requires close coordination with the company’s many suppliers.

Boeing asks suppliers to integrate two special 737s into the 47 produced each month. The fuselages of these special planes are about 50% thicker than a commercial 737 and the entire airframe needs to be reinforced in order to withstand more aggressive maneuvers. The planes are also fitted with deicing equipment on the entire surface. The weapons bay and missile pylons are added by the contractor instead of adding them in later as customized features.

As you can imagine, it takes a lot of careful coordination to add two P-8s to the line each month. In contrast to a 737, which takes about two weeks to assemble start to finish, the P-8 takes two months, largely because of all the avionics and systems that need to be added to the aircraft after its airframe is complete.

Still, that’s a remarkable turnaround for a military aircraft, one that Boeing is very proud of.

The 100th Poseidon emerged from the factory in early May and sales overseas continue to be brisk. New capabilities are added on the fly, as are the unique requirements other allied countries, who have taken deliveries of the P-8.