Sunny days ahead for Washington. 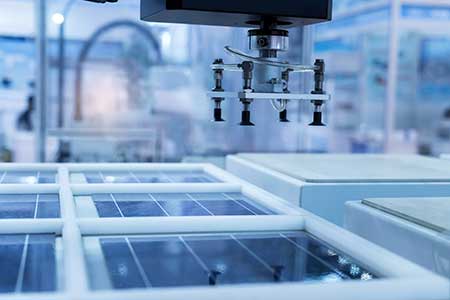 With its reputation for gray skies, you’d think Washington State would be the last place someone would consider for solar panel production. But that’s just what Violet Power did, announcing plans to locate the first fully integrated manufacturing plant in the U.S. in Moses Lake.

When full production begins, the company will be turning out 300 to 500 megawatts of solar power a year. The location is strategic, as there’s plenty of space for supply chain partners to set up operations nearby. Violet plans to make all their materials and parts domestically, becoming the only crystalline silicon solar plant in the nation to do so.

“As time goes by, we could extend both downstream as well as upstream, starting with cells and working from there,” says Charlie Gay, Violet’s CEO, referring to the potential to include wafer and ingot production.

In the near term, Violet Power is getting its supply of ingots and wafers from a European supplier. But the new plant is right across the street from the former REC Silicon complex, which offers new opportunities for partnership, vertical integration and supply chain growth. Over time, Violet plans to expand production capacity northward of five gigawatts.

The company will incorporate technology developed by SunFlex Solar, a team out of Arizona State University that in late August won the Department of Energy’s American-Made Solar Prize.

Aligned with Washington’s goal of becoming a 100% clean energy state by 2045, the new plant is a great complement to the state’s growing clean energy portfolio. “I am pleased they are committed to supporting the continued development of a complete solar manufacturing supply chain,” says Washington Governor Jay Inslee.

Initially, the facility will employ several hundred workers but long term, that number could dramatically increase as demand and production capabilities increase as well.