Electric ferries on the horizon?

Seeking ways to reduce its carbon footprint while making the state’s waters more friendly to marine life, Washington State is studying the use of an all-electric ferry, the first of its kind for the United States’ largest ferry fleet.

The run between Anacortes and Guemes Island could be the beneficiary, given its short run and capacity requirements. The new battery-powered ferry would not only reduce fuel costs but also run quieter underwater, the noise of watercraft posing a major threat to killer whales, salmon and other marine wildlife.

The Guemes route is a natural testing ground for a larger electric ferry project – converting some of the state’s 22 ferries to hybrid electric. Given that these ferries already have electric motors, the process would be relatively straightforward to convert their power source from the current diesel engines to a large battery, with the diesel serving as a secondary power source, say marine engineers.

Thanks to the collaborative efforts of Washington’s clean energy and maritime sectors, the new electric ferry initiative is carrying a lot of weight. Innovation by Washington companies in battery storage and energy management is creating new efficiencies in electrically-driven craft, from cars to ferries.

“If the technology pans out as we expect it will, it could have major implications on all maritime traffic coming in and out of the Salish Sea,” says Bruce Agnew, director of the Discovery Institute’s Cascadia Center for Regional Development. “This could put the Salish Sea on the map, politically and environmentally.”

Read more about Washington’s efforts to electrify its ferry fleet and the potential benefits that can be realized economically and ecologically. 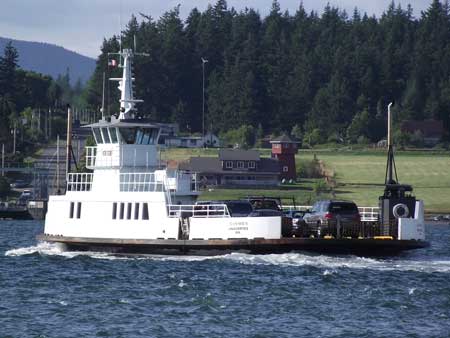