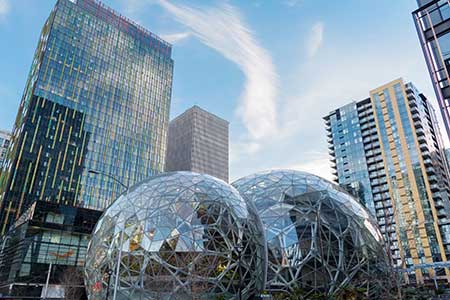 Washington’s aerospace roots may run deep, but the crown for the state’s largest employer has been claimed by a technology company for the first time.

Started in a Clyde Hill garage by CEO Jeff Bezos, Amazon has grown to become the state’s #1 employer, eclipsing another home-grown success story, Boeing. According to at least one historian, the unofficial title has probably been Boeing’s since the end of World War II.

While Amazon’s dominant position in the marketplace received a sizable assist from a global pandemic and stay-at-home orders, the company has also benefitted from Washington’s growing technology sector, which today employs some 200,000 workers statewide.

More than 80,000 of those workers are Amazonians, a 25% increase in just a year. Worldwide, the company employs approximately 400,000 workers. In the last year, its stock prices have soared by 72%, even though the economy itself went for a roller coaster ride. It’s estimated that Amazon has added more than $87 billion to Washington’s economy, indirectly supporting an additional 220,000 jobs.

In contrast, Boeing went into the year with 71,829. But the pandemic and downturns in the travel industry caused orders to be delayed or canceled. By year’s end, in-state employment stood at 58,800.

The shift to a technology economy started decades ago, with Boeing playing a large part in the sector’s growth. Giants like Cray, Microsoft, Aldus and McCaw Cellular helped spur additional growth and expansion as former employees created new endeavors. Over time, other companies started or opened engineering offices, drawn by the talent and the opportunities in hardware, software cloud computing, artificial intelligence and gaming.

Today, Amazon offices are located throughout the Puget Sound region, anchored by its world headquarters in the South Lake Union neighborhood of Seattle.

The rise of the tech economy has had a spillover effect on the very character of the region. Long a rugged blue-collar community, the greater Puget Sound region is now one of the world’s foremost technology centers with an estimated 14,000 tech businesses, from one-person startups to Amazon. Working-class bars and restaurants have given away to posh eateries and brewpubs, catering to a younger, tech-minded audience and transforming the city into a sophisticated center for culture, entertainment and quality of life.