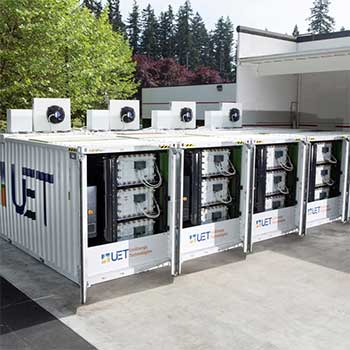 Clean energy sources such as wind and solar have long offered a clear path to less pollution and greener energy.

However, storing it has been next to impossible, until now.

UniEnergy Technologies, based in Mukilteo, Washington, thinks it has found the answer: vanadium-flow batteries which store energy generated by solar arrays or wind turbines in a fluid that can then be discharged using an electro-chemical reaction. The vanadium molecule which makes this all work was developed by the Pacific Northwest National Laboratory in Richland, Washington.

The company is currently building a storage system for the U.S. Navy in Port Hueneme, California and has installed a vanadium-flow battery for the Snohomish PUD in Everett.

“Washington is leading not just the country, but the world” in revolutionizing the power industry, said Gov. Jay Inslee. “We love clean energy not just because it’s clean, but because it is jobs,” too.