Something fishy is going on here. 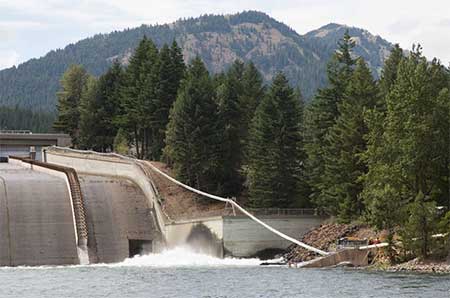 Social media has been losing its mind over the salmon cannon. Not only is it a thing, but it’s a uniquely Washington thing, cooked up by Whooshh Innovations in Seattle.

The darling of Twitter, YouTube and late night talk shows, the salmon cannon offers a safe way for salmon to navigate the many dams that block their way to prime spawning grounds. Fish ladders have been the traditional method to get salmon to where they need to go, but the salmon cannon is more efficient, faster and safer for the salmon.

One can only imagine what the salmon think of it. One moment they’re fighting their way upstream, the next they are being propelled through a pliable tube and over the dam at a brisk 22 miles per hour. The whole process takes seconds and the salmon doesn’t have to exhaust itself trying to navigate a fish ladder.

Whooshh Innovations created the prototype back in 2014, but it was fairly labor intensive since humans had to load each salmon into the tube. The system has been automated since and once the salmon make their way through the one-way gate, a pressure differential between the front and the back of the fish sends them on their way. The flexible tube adjusts to each salmon’s size and sprays them with water so they can continue breathing on their short trip through the tube.

Is it harmful to fish? Absolutely not, says Vince Bryant, CEO of Whooshh. The Pacific Northwest National Laboratory conducted a study that found that the cannon-ized fish actually sustained fewer injuries compared to traditional fish ladders. The fish experiences no undo stress. The ride could even be considered somewhat comfortable for the salmon.

The salmon cannon can move about 50,000 fish a day and is far less expensive than fish ladders. So far, Whooshh Innovations has sold nearly two dozen salmon cannons to government agencies in the U.S. and Europe. The longest one is 1,700 feet long, more than a quarter of a mile.

Read more about the salmon cannon in The Seattle Times.

Or watch the YouTube video showing it in action.