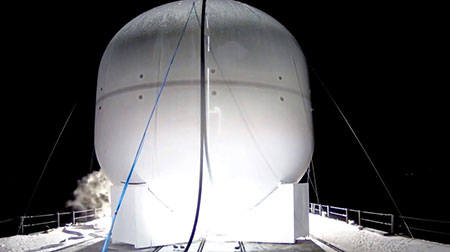 SpaceX is moving full speed ahead with its massive BFR rocket system, capable of ferrying 100 explorers to the Moon or Mars and back.

The company has turned to Janicki Industries for testing of the new carbon-fiber fuel tank used in the spacecraft. A pressure test of the tank was recently conducted off the Pacific Coast, shooting the 30-foot diameter tank 300 feet off the deck of the barge as it was pushed beyond its design limits. The tank is believed to be one of the header tanks, which can hold 1,200 tons of liquid oxygen.

To build the new spacecraft, SpaceX secured a new dock facility in Los Angeles, since most of BFR’s components are too large to ship by land. Part of the filing states that the facility will receive a new shipment from the Puget Sound area by barge roughly once a month. Insiders say that it looks like Janicki will be a tank supplier for the foreseeable future, as SpaceX turns its attention to building the new spacecraft and its systems. BFR will be powered by 31 Raptor-class rocket engines.

Janicki is no stranger to space projects. The company has also done work on the new Boeing Starliner and NASA Orion spacecraft, which will return U.S. astronauts to space. One of the most difficult projects was the Starliner’s Lower Pressure Dome, which required 1,500 pockets to be machined out of space-grade aluminum alloy.

To learn more about Janacki and work on the BFR spaceship, visit Geekwire.

You can learn more about Washington’s commercial space cluster on ChooseWashington.com.