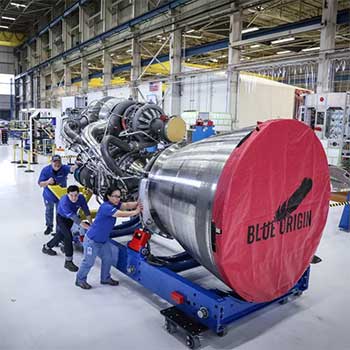 Blue Origin has debuted its new BE-4 engine, which will power a new generation of rockets, including the company’s own New Glenn spacecraft. A follow-on to New Shepard, the New Glenn will have the capability of flying missions to the moon.

The new engines were built in Blue Origin’s Kent production facility and will undergo testing soon at the company’s West Texas test range. After it passes those tests, it will be used on United Launch Alliance’s Vulcan rocket, scheduled to replace the Atlas V.

The engine will also be used to power Blue Origin’s New Glenn family of rockets, which are currently in development. New Glenn is not only designed for orbital missions, but translunar missions as well. Missions to the moon would also utilize the company’s BE-3 engine for the second stage.

The company has already secured its first customer for the New Glenn, Eutelsat Communications. Eutelsat’s satellite will provide coverage for Europe, the Middle East, Africa, Asia-Pacific and the Americas.

The BE-4 is just another shining example of Washington’s growing space sector.

Read more about Blue Origin’s BE-4 rocket engine and the company’s plans for the future.