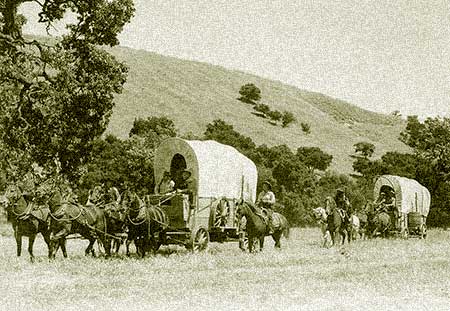 Traveling to Washington State is pretty straightforward these days. But a century or more ago, it took a real pioneer spirit to endure the travails of traveling across the continent, a spirit of exploration and curiousity that has left its indelible mark upon the people and culture of Washington State.

The Longmire family from Indiana is a fine example of this unique grit and determination.

They set out from Indiana in 1853, looking to start a new life in the Washington Territory. There were no highways back then, nor train tracks.

To get to the Puget Sound region the Longmires had to first get to St. Joseph, Missouri by steamboat. There, they could secure a covered wagon, team of oxen and some horses before joining a wagon train headed west.

After nearly six months on the trail, they finally reached the fork that would take them to Fort Walla Walla in Washington Territory. It would provide a respite before tackling the Cascade foothills and peaks that lay between them and the Puget Sound.

The would need the rest. At the time, there was no wagon trail across the Cascades, only a rugged foot horse path. No one had ever tried to drive a team of wagons across the mountain range before. The and the rest of their party were the first.

What happens next is a shining example of that perseverance and resilience Washingtonians are famous for, even today.

Leaving the comfort of Fort Walla Walla, the wagon train set off on its nearly 300-mile journey in October. For four long days, the settlers crossed the Naches River a total of 52 times with their wagons, oxen and horse teams to reach the foothills.

At a fork in the river, the wagon train headed upward. It took three days to reach the summit of Naches Pass, 4,928 feet above sea level, where they found good grass for their livestock and water to replenish their dwindling supplies.

What happened next is a true test of that famous pioneer spirit. Faced with no easy way down, the settlers improvised. After sacrificing two of their oxen to make rawhide rope, they set about lowering each wagon down a 1,000-foot precipice. Of the 30 wagons that made the journey down to the valley floor, only one was lost.

As the men lowered the wagons, the women and children followed the winding footpath down the slope. Along the way, they came upon a traveler who tried to talk them out of going any further west, saying it was too rough for wagons.

Thankfully, the settlers took the food he offered, but not his advice. The journey was indeed arduous, and the wagons had to cross the White and Green rivers as well, but everyone finally made it safely to Fort Steilacoom on Oct. 9, 1853.

As for the Longmire family, they went on to play an important role in the exploration of Mount Rainier. James was the first explorer to take an expedition to the summit of Mt. Rainier in 1870 and he completed a solo climb a few years later. If you’ve ever been to the hot springs along the Nisqually River by the same name, the Longmire family discovered its entrepreneurial talents along the way, turning the springs into a popular tourist attraction.

Just more of that pioneer and entrepreneurial spirit that makes Washington such a great place to live and do business.