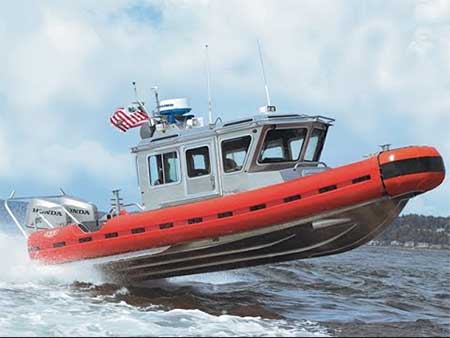 Every company likes to claim it started in someone’s garage. In the case of SAFE Boats, which is celebrating its 20th year, it’s true! – you can still drive by the garage on Port Orchard’s Mullenix Road.

“We literally started as small as you could be,” said Scott Peterson, who co-founded SAFE Boats in 1997 with partner Bill Hansen.

Today, the company has become a global maritime force to be reckoned with, producing 2,000 boats in service in 60 different countries. Three hundred fifty workers build the boats in two facilities, one in Bremerton and the other in Tacoma.

SAFE Boats’ revolutionary design is Hansen’s handiwork; he designed the foam collar that mimics an inflatable’s stabilization and buoyancy without the risk of puncture or outright failure.

SAFE Boats (SAFE stands for Secure All-around Flotation Equipped) started out building custom boats for fishermen and divers. But they soon found that law enforcement agencies were interested in their craft and the company responded with new models aimed at patrolling anything from shallow rivers to the rough seas of Alaska.

Timing is everything in business, and in an ironic twist of timing, the company’s products took on national importance in the wake of 9/11. Transportability and mission adaptability became important for homeland security and orders poured in, so much so that the tape that marked off the 25,000 square feet they needed in their new building didn’t last long as they continued to expand into the other 38,000 square feet to keep up with demans.

Find out more in the Kitsap Sun.