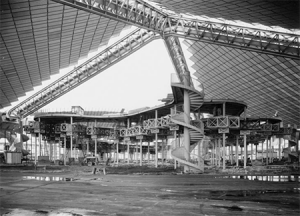 The “new” Climate Pledge Arena opened to adoring fans and critics alike recently with great fanfare. The arena, home of the Seattle Kraken, is designed to be entirely sustainable. It even uses rainwater drained from the roof to create the ice on the rink.

However, few know that the roof is courtesy of the Washington State Department of Commerce and the 1957 state legislature. Built for the Century 21 Exposition in 1962, the Washington State Pavilion was a centerpiece of the world’s fair and, 60 years later, lives on as the Climate Pledge Arena.

Designed by noted architect Paul Thiery, the 130,000 square foot pavilion was revolutionary at the time because there were no interior roof supports. The hyperbolic paraboloid (for you architecture students), was supported by four massive concrete abutments. The aluminum-paneled roof was supported between them by steel compression trusses and nearly six miles of cables. The iconic roofline rose 11 stories high over the interior of the space, which covered four acres.

The $4.5 million project (about $980 million in today’s dollars) was paid for by the Department of Commerce and Economic Development, as it was known back then. While much of the interior has changed with subsequent expansions and remodels, the roof, which weighs in at 44 million pounds, still stands on the shoulders of the original Washington State Pavilion. 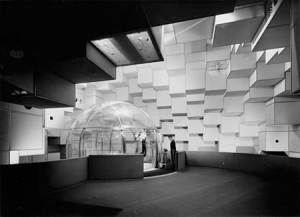 During the fair, the Coliseum/Key Arena/Climate Pledge Arena held Commerce’s World of Tomorrow Exhibit and exhibits from other countries and corporations. Visitors entered the World of Tomorrow presentation via the Bubblelator, a clear sphere “where you step to the rear,” as the operator’s script noted.

The 21-minute walk featured the future of transportation, history, food production, housing, education and recreation in the 21st century. RCA did the audio-visual extravaganza, which was the first time staging, timed presentations and electronics were used on such a large scale. Every two and a half minutes, the exhibit would reset as 100 more passengers arrived by Bubblelator.

And what did the future look like? After a sweeping introduction to the history of civilization up until 1962, visitors were taken into the 21st century, where people commuted by gyrocopter and traveled on monorails and high-speed “air cars” on electronically controlled highways. The school of the future featured electronic storehouses of knowledge (not too far off), and offshore there were automated kelp and plankton farms. Air travel was going to be measured in hours and minutes rather than days.

During the fair, the space also hosted exhibits by Pan Am, the American Library Association’s “Library of the Future,” RCA, the Washington State tourism office, France and GM, which showcased their car of the future.

After the fair, the World of Tomorrow Exhibit was dismantled and the rest of the space was readied as a sports and convention facility. The Bubblelator found a new life in the former Food Circus, transporting passengers to its three levels instead of the future. When it was finally retired, the Bubblelator became a greenhouse. The futuristic control panel and costumes ended up at the Museum of History and Industry.

Read more about the Century 21 Exposition in Seattle.