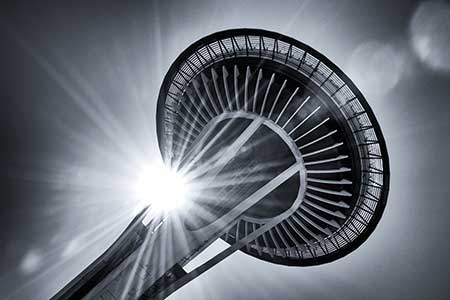 How time flies. The Space Needle, Washington’s world’s fair vision of the future, is turning 60. What was once a last-minute thought for the fair has become a symbol of the state and its reputation as a forward-thinking, can-do place to be. Penciled out on a cocktail napkin, the Needle was constructed in just 13 months.

Finished off in a Space Age color scheme of “re-entry red,” “orbital olive,” “galaxy gold” and “astronaut white,” The Space Needle quickly became the icon of the 21st Century World’s Fair, which drew tens of thousands of visitors from all over the world to Seatle during its six-month run.

Most of the country and company exhibits were dismantled when the fair closed. They were never built to last. At 605 feet, the Needle was never planned to be temporary; instead, it was designed to anchor a new community park and gathering spot, the Seattle Center. The fair’s U.S. Pavilion became the Pacific Science Center and the Washington State Pavilion was transformed into the Coliseum and, later, Climate Pledge Arena.

Back in 1962, The Space Needle boasted the world’s fastest elevators – climbing to the observation deck at 14 feet per second, about the speed of raindrops. The elevator also stopped at the restaurant level, one of the few high-rise restaurants in the world to revolve. It did a complete turn every hour, and the meal was timed so diners could experience the 360-degree view as they ate.

The Space Needle has Paccar to thank for its elegant, waspish waistline. Bob LeBlanc utilized what was then a little-known technique (pioneered in 1938 by a Seattle blacksmith, Joe Holt) called Thermal Upsetting. The process allowed the massive I-beams to be heated on one side so that as they cooled, they would shrink while the cooler side would not, bending the metal. This process is still in use today, allowing continuous piping to be shaped and curved without forcing parts together.

The passage of time has been kind to The Space Needle. It still looks pretty futuristic, especially against a backdrop of blocky skyscrapers. As it celebrates its 60thj anniversary, an extensive remodeling has replaced the restaurant with a revolving floor of glass, and the observation deck walls were removed to open up the view. You can even loop straight down if you aren’t afraid of heights.

To celebrate the passing of 60 years, the roof of The Space Needle is going to return to its original “galaxy gold” color to mark the anniversary of a city icon that continues to welcome the future while celebrating the past. Five lucky contestants even get the chance to do a little painting up there, if they dare.

Read all about it!