Keeping things on track (and wheels) since 1906. 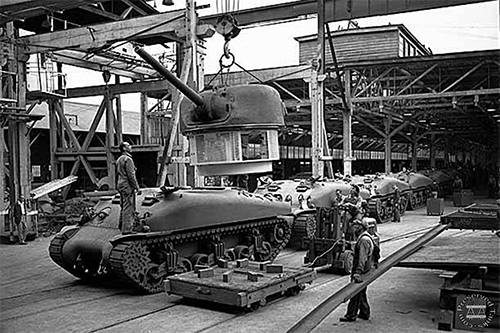 Detroit may be the Mecca for automobile manufacturing in the United States, but you’ll have to look a lot farther west to find out who owns the medium- to heavy-duty truck business.

Paccar is the third largest manufacturer of heavy duty trucks in the world. If you do long haul, you definitely know the names of their most well-known brands: Peterbilt, Kenworth, DAF and Leyland.

The company’s Washington State roots date all the way back to 1905. That was the year that William Pigott, Sr. founded the Seattle Car Manufacturing Company, which manufactured logging and railway equipment. When Seattle Car merged with Twohy Brothers in Oregon, Pacific Car and Foundry Company was born.

While railway cars and logging equipment were the company’s bread and butter for nearly 30 years, it got into the vehicle manufacturing business in World War II, producing Sherman tanks as well as the T28 Super Heavy Tank and the M25 Tank Transporter for the U.S. Army.

After the war the company continued to expand into the motorized transportation market, purchasing the Kenworth Motor Truck Company in 1946 and Peterbilt in 1958. Given that they weren’t just in the car and foundry business any longer, the company changed its name to Paccar Inc.

Even though its product line was expanding, the company still stayed true to its foundry origins through the last half of the 20th century.

The Space Needle has Paccar to thank for its elegant, waspish waistline. Bob LeBlanc utilized what was then a little-known technique (pioneered in 1938 by a Seattle blacksmith, Joe Holt, by the way) called Thermal Upsetting. The process allowed the massive I-beams to be heated on one side so that as they cooled, they would shrink while the cooler side would not, bending the metal. This process is still in use today, allowing continuous piping to be shaped and curved without forcing parts together. The company also contributed structural steel to the Grand Coulee Dam and the World Trade Center.

Through the years Paccar has continued to build upon its reputation as a business legend by diversifying and expanding into markets ahead of the curve. In addition to being the largest manufacturer of medium- and heavy-duty trucks in the U.S., Paccar also has its own financial division to facilitate the sales of vehicles, a parts division for Kenworth and Peterbilt trucks and an information technology division.

Learn more about this Washington State business legend at their website.