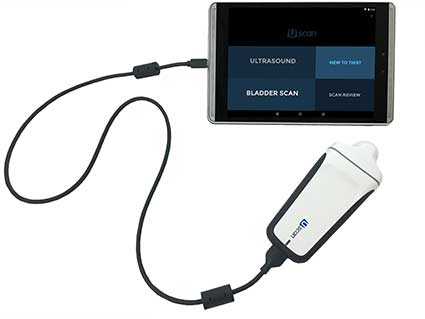 When most people think ultrasound, they think of blurry images of what is supposed to be a baby still in the womb. But a lot has changed in recent years, as not only the technology has improved, but it has been connected to other technological advances as well, such as computer tablets, phones, big data and AI.

EchoNous’ Uscan device is about the size of an electric razor. As far as medical devices go, it’s not the sexiest thing on the planet. But underneath the hood, all the magic happens. The scanner can record 256 data slices of the bladder in each fanning motion. The slices are run through a vision-based algorithm that turns the slices into a 3D model of the bladder. The result is a clear picture of the organ, which can be compared with data and views of a healthy bladder.

Since its introduction, roughly 20% of hospitals have adopted the ultrasound device, which is both a timesaver and often leads to more accurate diagnoses with less invasiveness.

The company is also developing a new vascular access probe that will allow nurses to locate veins using a video screen to see the veins and arteries with greater accuracy. Pending FDA approval, the device should become available soon.

EchoNous’ innovation is another great example of how Washington’s culture of collaboration leads to cross-pollination between business sectors, such as information and communication technology and life science in the case of these new ultrasound devices.