The taste of sweet success. 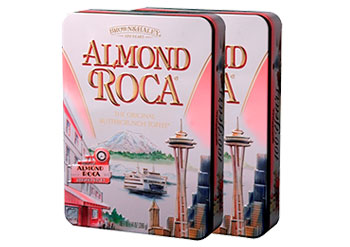 Even if you know the name Brown & Haley, the makers of Almond Roca, you may not know that there really was a Mr. Brown and Mr. Haley. Harry Brown and J.C. Haley met in church in 1908. Harry had a passion for creating confectionery delights; J.C. worked for Shilling and Company, the spice folks, and had a gift for selling.

And if it weren’t for that chance meeting in a Tacoma church, the two may have never achieved such sweet success in the business world. After becoming friends they decided to go into business together, starting their small candy making company in Tacoma in 1912.

By 1916 Brown & Haley was producing a full line of candies, including a favorite known as the Mt. Tahoma Bar. With its vanilla cream center and chocolate and nut covering, it was a local favorite. Its fame spread as far as Seattle, and to recognize its new regional fame, the company changed the candy’s name to Mountain Bar, a name that continues to this day.

Business boomed during the “war to end all wars,” World War I. The bulk of Brown & Haley’s sweets went overseas to give soldiers a taste of home.  With the end of hostilities, sales flagged and the two men did what Washington State companies seem to do best – innovate.

They began to experiment with a new signature candy and in 1923 they hit pay dirt, well, to be more precise, Roca, lots of it. The log-shaped buttercrunch candy was called Almond Roca, a name a local librarian chose for it.

One of the best parts about Almond Roca was the fact that it not only tasted delicious, but also traveled well. With the outbreak of World War II, Brown & Haley candies went to war once again. Troops were more than eager to share their little piece of heaven from back home, so much so that the fame of Almond Roca continued to spread far and wide.

Foreign markets started to ask about the candy and today 35 countries are importing the familiar gold-foil wrapped candies in the pink container.  Approximately 40% of the company’s products are exported.

While the company is still headquartered in the same building it was founded in, Brown & Haley has continued to expand, adding facilities to keep up with demand while ensuring that the candies stay true to the vision of their founders in terms of quality, freshness and flavor, whether the candy is sold just down the street or halfway across the globe.

The company celebrated its 100th anniversary in 2012. Though the Brown &Haley has changed greatly over the years, it still honors its humble origins. Almond Roca connects a rich past with a bright future, one that is based on continual innovation and experimentation tempered by good old fashioned business sense.