If the name Funko doesn’t ring a bell now, it may soon. Without much fanfare, the company has been quietly churning out its ever-changing lineup of toys and collectibles that have a “funatical” following of fans and collectors. 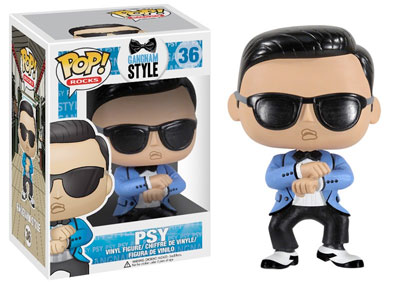 The secret to their success – an extraordinary ability to know what the next “big thing” in pop culture will be and a knack for bringing brilliant products to market quickly, while they’re still hot. Yes, the Funko creatives knew that Gangnam-style was going to big, even before most people knew who that Psy guy from Korea was. A bobbled head Psy was ready for the 2012 holiday season.

Funko has come a long way from its early days in Mike Becker’s basement in 1998. It was there that he and Sean Wilkinson slaved away on bobbleheads of Evel Kneivel, Popeye and Big Boy, the cherub-cheeked front man of the Big Boy burger chain.

Today, Sean serves as the creative director of the company, crystallizing the unique look of the toys and collectibles, and overseeing a staff of artists who are capturing pop culture on the fly, turning its icons into everything from bobbleheads and plush dolls to vinyls and electronics.

Funko is growing so much that it outgrew its 17,000 square-foot office in Lynnwood, moving to a new 220,000 square-foot facility in Everett; spacious enough to give Funko’s 200 employees some elbow room with enough room left over for a showroom.

Tour the showroom and you’ll see a who’s who of pop culture standing shoulder to shoulder to one another, from Darth Vader and Boba Fett of Star Wars fame to Sheldon from The Big Bang Theory. The company has a knack for locking in licensing deals with all the big names – Marvel and DC comics, Lucasfilm, Disney and Hanna-Barbera – if you need a few names. If it’s hip and iconic, chances are good that Funko has a line of products related to it, including Family Guy, The Simpsons, The Hobbit, Iron Man and The Game of Thrones. Funko ships more than two million units around the world; some of their biggest customers are Target, Walmart, Toys ‘R’ Us, Amazon, Hot Topic and Spencer Gifts.

The ideas for bobbleheads, Pop! Vinyls and plush dolls come from in-house. Artists craft the new items on computers, send them to other artists throughout the U.S. so mock-ups can be produced, then ship the final designs overseas for manufacture, making Funko a global importer and exporter.

Who would have guessed that Washington State would be a leader in the toy and collectibles market? With a stellar portfolio of licenses, more than 1,000, and sales of $20 million plus annually, Funko is definitely one of the leaders, and most important, one of the most influential companies in the industry, with an uncanny eye for what’s next in the ever-changing and often fickle world of pop culture.

To learn more about the Funko, visit the company’s website.