Peter Hansen’s company has come a long way from its horse and buggy days. Well, horse and wagon are more accurate. Long before the first horseless carriages arrived in Washington State, horses and wagons were the only way to get Peter’s company “moving.” 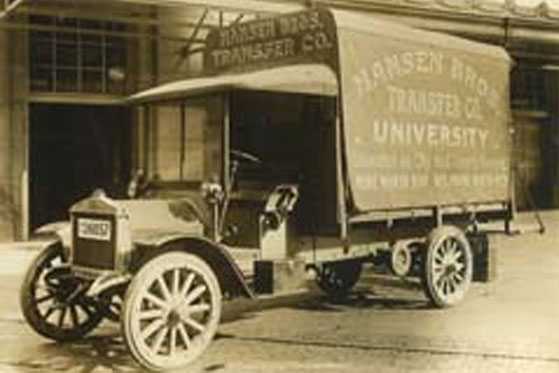 It was perfect timing. Seattle was a boomtown when P. Hansen Transfer opened for business in 1890. The town’s population had exploded, going from 3,353 to 42,837 in just 10 short years. Hansen saw there was an opportunity and like most Washington business legends, seized it.

Also known as Pete Hansen Express, the company quickly took off. While local moving has always been part of its strategy for success, the company’s bread and butter were hauling and shipping freight and baggage to and from the trains and ships that continually called on the bustling port city. The work was hard. The age of freight containers was far off in the future. Everything had to be loaded and unloaded manually by drivers who wore chaps to protect their clothing as they hoisted crates onto wagons with hay hooks.

Soon, the Hansen brothers, Jim and Henry, joined the family business. Sadly, they lost their father and company patriarch in 1915. Picking up the mantle of managing the family business, sister Johanna left her role as the bookkeeper and took over the day-to-day operations of Hansen Bros. added by her mother, Metta.

After running the company for 40 years, Johanna turned over the reins of the company to Jim Nelsen, her nephew, marking the third generation to run the business in its 120 years.

Today, Hansen Bros. Moving and Storage has three locations in Seattle, Lynnwood and Bellevue and offers moving, storage and shipping services throughout the region, the nation and the world, thanks to those new-fangled containerized cargo systems that eventually came along.

While the company has changed tremendously over the years, Hansen Bros. continues to celebrate its rich family legacy, including adhering to a tradition started by the company’s founder, Peter. In the horse-drawn wagon days, each horse had a name. As mechanized trucks came online, the trucks were named in a similar fashion, something that the family continues to do to this day.

Visit the company at HansenBros.com.