Life, liberty and the pursuit of Cotlets.

Often, the true measure of success in the business world is how many times you try and try again before you finally succeed. In the case, of Armen Tertsagian and Mark Balaban, two young immigrants, their first ideas were good, but their last one was nothing short of brilliant. 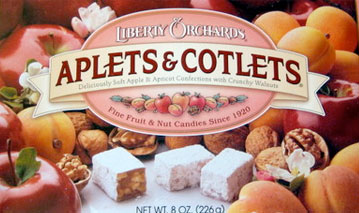 The two American immigrants made their way to Seattle at the turn of the 20th century, back when the Northwest was still a rough and tumble place to be. Their first two businesses, a yogurt business and Armenian restaurant were about a hundred years ahead of their time.

So they packed up and headed for Eastern Washington. There, nestled in the shadows of the Cascade Mountains, they found a place that felt like Armenia, both in appearance and climate.

Their new farm, named Liberty Orchards in honor of their new homeland, was hardly an overnight success. Being an orchardist was hard back then and unpredictable. Wanting to reduce the spoilage of their growing apple harvest, the men started to diversify, opening up a cannery called Wenatchee Valley Foods and creating Applum, an apple and plum jam.

Still faced with an oversupply of the fruits from their labors, Mark and Armen put their entrepreneurial spirit to work. Modifying a recipe for Rahat Locoum, an eastern European candy, the men created the first apple and walnut candy, Aplets®, joined a short time later by Cotlets®, which are made from apricots and walnuts.

Aplets and Cotlets became a very popular item as people visiting the state brought the confections back as gifts. To keep up with demand, the company started a mail-order operation, which in its online incarnation, is still going strong today.

Marketing these Northwest favorites has always been a low-key affair. After being a big hit at the 1962 World’s Fair in Seattle, the company continued to promote their products at world’s fairs and their Grapelets® was the official candy of Expo ’74 in Spokane.

The family operated company has continued to build its reputation and fame over the last century, adding new products to keep up with changing times.  And while Aplets, Cotlets and the rest of Liberty Orchard’s line of fruit candies are still locally loved, they have gained national fame, shipping their products throughout the U.S. and even abroad and their candy kitchen in Cashmere continues to draw 80,000 visitors a year.